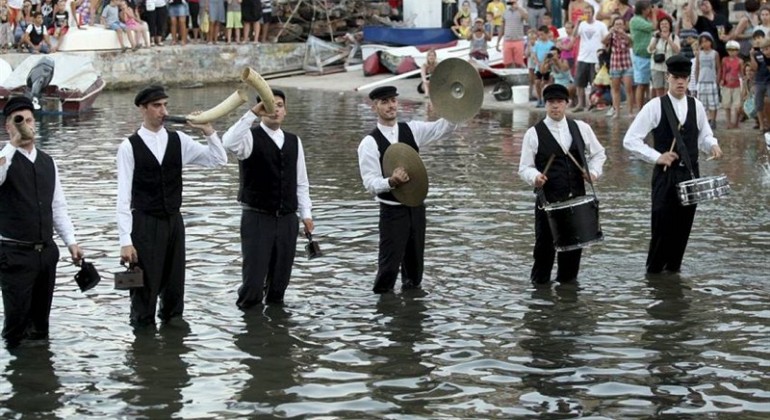 As an old song says, “Every place has its festivity” so do villages on Dugi otok welcome each of their festivities with joy. The festivities are mostly held in honour of a patron saint of a particular village.
The festivities on Dugi otok are a combination of live music, fine food and good entertainment till the early morning hours. The most famous is the one in Sali called „Saljske užance“ which lasts three days. Various presentations of folk customs are held during the festivity while the locals participate in gastronomic competitions that will impress all food lovers.
Those who can’t wait for the party to begin can start by going to one of the many restaurants with different but mostly Mediterranean cuisine as well as bars and ice-cream parlours where you can taste the island way of life and its culinary traditions.

Saljske užance is a cultural and entertaining event that has been held for more than 50 years. The date of the festivity is the first weekend of August.

Friday – “Fisherman’s Night” – the opening of the festivity Saljske užance by raising the flag with donkey music performances, cooking and choosing the best fish stew, roasting of tuna, sardines and other seafood, and an entertainment program at the port with klape – Dalmatian a cappella singing groups.

Saturday – during the day sports events and competitions are organized (scooter races, potato bag racing, stilt races, rope pulling), followed by “Sali Night “(Illumination of the Port, and of ships and boats), and entertainment on the quayside with pop music and traditional foods.

Sunday – the morning begins with patriotic songs all over the place Sali, then in the afternoon follow the traditional donkey races “Trke tovarov’, a spectacular event for all guests on the island, which takes place at the quayside of Sali. Upon completion of the race follows the granting of awards for the fastest donkey (e.g. ham) and for the laziest donkey, the one that reached the finish line as last. For its venture the laziest donkey and his owner get a deserved award – a diploma. After the race, follows the last performance of “Tovareča mužika” (donkey music), which ends with a swim of all the performers in the port of Sali.

In the evening hours follows entertainment for all visitors with live music, which is the latest in a series of concerts and events at the Sali festivity.